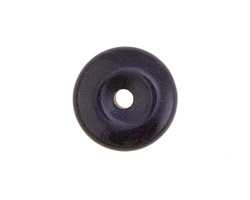 The most common form of Goldstone is reddish-brown in color; the color comes from the copper crystals and the glass itself is actually colorless. However, another variant, called Blue Goldstone, has a blue glass matrix and a more silvery appearance to the suspended particles. This may be because the particles are composed of metals other than copper (e.g., cobalt, manganese, or chromium).

Our Blue Goldstone beads are a deep navy blue color that is flecked with thousands of tiny particles of glittering silver and royal blue. Sparkly!

Legend has it that Goldstone was first manufactured by accident in 17th century Venice. According to this legend, a monk accidentally spilled copper filings into the pure glass being produced in the monastery in which he lived. Horrified by his wasteful mistake, he tossed out the ruined batch of glass and started over. When the ruined batch of glass cooled, its shimmering beauty was noted by fellow members of his order, and a mistake became a happy discovery!

Goldstone is a type of synthetic glass that is heated a very high temperatures and then mixed with copper or copper salts. When the mixture cools, the copper precipitates into small crystalline clusters that sparkle inside the glass.