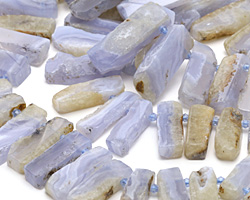 Chalcedony is one of the earliest "hard materials" used by humans. It was shaped into everything from arrowheads to cups and bowls. Our chalcedony beads are a tranquil, bluish-white color. Some portions of the beads are milky and opaque, while other portions are almost transparent. The soft color of these chalcedony beads goes wonderfully with freshwater pearls.

“icicle day with blue”
by MH