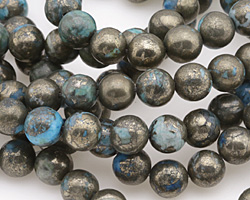 These golden pyrite beads have been color enhanced so that the inclusions of quartz take on a colorful tone. The golden pyrite is natural stone, but the pops of brighter color are the result of a coloring agent. All colors are permanent.

Our Golden Pyrite gemstone beads may be Fool’s Gold, but you're no fool if you adore them! With its metallic luster and golden hue, golden pyrite has earned the nickname Fool's Gold, since many miners have mistaken it for the real thing. In fact, very small quantities of actual gold are sometimes found in pyrite. Pyrite is quite easy to distinguish from true gold, as it is much lighter and harder. It cannot be easily scratched. The name of this gemstone comes from the Greek word “pyr”, meaning fire, as pyrite emits sparks when struck by metal. This stone manages to be both substantial and earthy.

Golden Pyrite is an iron sulfide, and is the most common of the sulfide minerals. Pyrite can be sourced from all over the world.

Pyrite is thought to attract luck, prosperity, and abundance to its wearer. This stone is also said to promote productivity and revitalization.