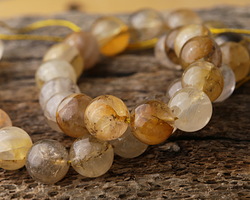 Landscape Agate gemstone beads feature beautiful natural colorations in clear, white, and light yellow, earthy orange, and brown. They have darker inclusions giving the beads depth and evoking desert landscapes. The name Agate is associated with the Achates River of Sicily, now known as the Dirillo River. Agate was utilized by ancient Greeks and Romans for decorative carving and arts, and examples from that time are still extant.

Agate is a variety of chalcedony, which is itself a form of quartz. Agate displays distinct banded patterns. Landscape agate has dendritic inclusions that look like moss or coral.