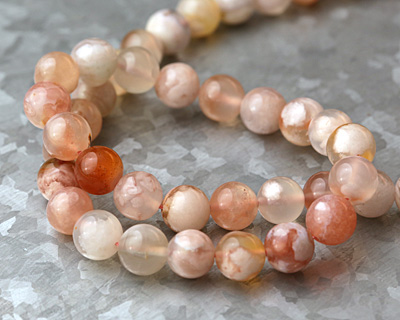 Natural Pink Agate gemstone beads have light petal-pink coloration, in tones ranging from ivory, sunny corals, to pink carnations. These beads have gorgeous dendritic, moss-like inclusions. Natural Pink Agate is sure to impress! The name Agate is associated with the Achates River of Sicily, now known as the Dirillo River. Agate was utilized by ancient Greeks and Romans for decorative carving and arts, and examples from that time are still extant.

Agate is a variety of chalcedony, which is itself a form of quartz. There are a multitude of agate varieties specific to locations all over the world.