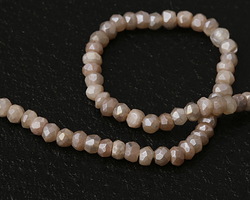 Moonstone's radiant, translucent appearance is similar to that of the glow of the moon, hence the name Moonstone. Mineralogists refer to this semi-precious stone as Adularia, as it was first discovered in the Adula Mountains in Switzerland. The glowing flashes of light that are seen in moonstone beads are known as “adularescence”. This gemstone is usually whitish-blue (Rainbow Moonstone), but it can also be colorless, yellow, peach, gray, or even reddish.

Moonstone is a semiprecious member of the potassium feldspar family that exhibits a glowing bluish, silvery, or pearly white shimmer. Moonstone is sensitive to pressure and is vitreous in luster.

These earrings can represent all the colors in your blooming garden, rainbows, or classic...

For this necklace, I made little clusters of pearls, crystals, and moonstones, attached them to...

“Bees Are Buzzing”
by Maggies Mom