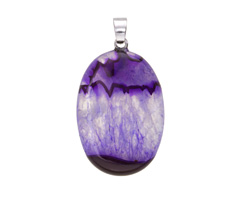 Satisfy your desire for the whole rainbow with agate beads! Natural agate is typically white or light gray with an opaque swirling pattern and a lot of translucency. When the material is dyed or heat-treated, these natural patterns are enhanced and vivid in coloration. The name Agate is associated with the Achates River of Sicily, now known as the Dirillo River. Agate was utilized by ancient Greeks and Romans for decorative carving and arts, and examples from that time are still extant.