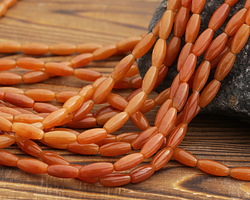 Our Red aventurine beads come in lovely shades of soft orange to dark reddish orange. The most common color of aventurine is green, but it is also found in shades of red, orange, brown, yellow, blue and gray.

Aventurine is thought to increase luck and prosperity. Many wear this stone to better their chances, at the casino or on a date. Red aventurine is specifically associated with sensual energies.

“Adventures in Aventurine”
by E Homewood