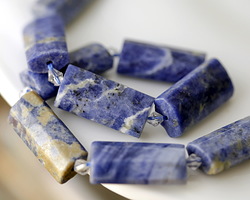 Unique, large beads perfect for your next necklace project! With striking patterning and gorgeous color variations, these beads make for excellent focals.