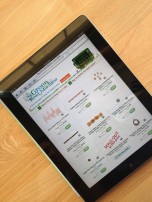 Here it is on an iPad

Over the last few months, we’ve been hearing a lot of people asking us to let them shop the Big Green Bead Machine on their iPads, smartphones, and computers that don’t have Flash installed. Well, a couple of weeks ago, we did just that.

One of the goals of our new website was to make sure that everything looks and works on mobile devices just as well as it does on our desktops and laptops. Now that we’ve updated the Big Green Bead Machine, every product is shoppable, every video is viewable and every page is accessible from your smartphone or tablet.

For those of you who prefer to think of what we do as “magic” and don’t really care exactly how this stuff really works, you can tune out now.

When we first developed the Big Green Bead Machine back in February of 2008, the iPhone was just over a year old and nobody had ever heard of an iPad. Back then, we had to use a technology called Flash to build  interactive features on our site. Now that iPad and smartphone usage is on the rise, Flash is one of those things (along with mice) that is being left behind in what Steve Jobs called the “Post-PC Era.”

Most of the new web browsers out today allow you to build things that are pretty and interactive without the use of Flash. In fact, even Adobe, who owns the Flash technology, has decided to move away from it in lieu of these new browser technologies.

Now that we’ve removed the Big Green Bead Machine’s dependency on Flash, you can use it just about anywhere.

Over the last two years, look at how much mobile web browsing has grown! In March 2012, 13% of all visitors to our website were using a mobile device. Last March, it was 5% and March of 2010 was 1%. What do you think these numbers will look like in 3 years?

We hope you like this update to the Bead Machine. If you have any questions or feedback, feel free to leave a comment!