Craft Nite (round 2) With Chain Maille!

The two things that stress me out the most here in bead-land are probably the mere mention of seed beads (we carry over 1100!) and/or chain maille. There’s so many LITTLE pieces! My fine motor skills have never been stellar (though I can type 75 wpm, does that count?) and all these little rings and beads can feel overwhelming. Anyone else get anxiety like that??

So when Kadie told me we were launching Weave Got Maille kits and suggested we try it out for another craft night, I was a little dubious. But as I considered her proposal, I figured this was something I could handle. After all, a kit has all the materials you’d need to make the picture on the box AND it has step by step instructions. (Also, they are bracelet-making kits, so I hoped to have a finished product in no time. It helps to have that positive sense of accomplishment early on when pursuing something new). 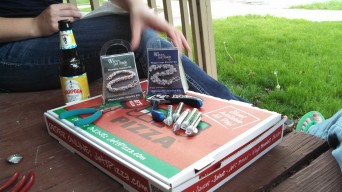 *Note: do not wreck your chain nose pliers by trying to pry off a bottle cap, please use a bottle opener for safety

Kadie and I gathered our materials and because of the SUPER nice Michigan weather we’ve been having, we sat out on my front porch. People watching, pizza eating, and chain-mailling ensued.

We noticed there was no warning on the kits for Beginner, Advanced, or Expert– so we had no choice but to jump right in and select a kit based solely on looks. Kadie chose the Byzantine bracelet because she liked the intricacies of the rings connecting. I chose the Shaggy Loop bracelet because it had seed beads in it (kill two birds with one stone right!?).

Now, I must admit, beading outside was THE BEST. Fresh air, friendly folks, birds singing, and being so close to the green grass helped me totally forget how crazy all these tiny pieces make me. I know, I know, folks often feel most comfortable in their little beading den, which is fine. But have you ever been outside? It’s great. I took a tip from one of our customers and brought out an old cookie sheet. Because my kit had the seed beads, I also brought out a dishtowel to serve as my beading mat (pretty inventive, right?). Being overwhelmed by the sizes, gauges, and types of jump rings was totally cut out of the picture with these kits. Upon opening, we found each type of ring in its own separate bag– made organization so easy! Then, my favorite part…the directions!! All we had to provide were the pliers. Kadie and I found ourselves using a mish-mash of different types of pliers, but decided using chain nose pliers without ridges was the best. It seriously cut down on ‘marring’ the rings. (At one point I started in with a pair of pliers from my travel tool box– thanks, Dad!– and while they held the rings well, the “grips” on there really dug into the jump rings).

Kadie got off to a great start. With over 200 rings before her and a first instruction of “open all your jump rings,” she was a little exasperated. But WOW. Be sure to listen to that first instruction! It makes it so much easier to get into a groove while chain maille-ing! It seemed like a silly instruction– and why not open while you go?– trust us, these Weave Got Maille people know what they’re doing! My kit didn’t have nearly as many rings as Kadie’s, but it did have the seed beads. I actually snatched a few other colors from Lima Beads’ stash because I wanted to make a Michigan State themed bracelet…so I needed some greens to go with the included whites.

Kate, trying not to go cross-eyed and facing her fears!

All in all, these little kits were great. It provided all materials (except pliers). It explained things clearly. And it made some pretty fancy looking jewelry! A mere three hours and what an accomplishment! Kadie thinks her bracelet was a little more difficult than mine… because it involved a little extra ‘weaving’ rather than just open/close of the jump rings. However, the instructions taught her how to do it. If a couple of novices could handle it, I think you can too! If you’ve ever been curious about chain maille, but overwhelmed by where to start, these little kits will set you up right and get you on the path to making your own tie-dyed-t-shirt (thanks, Pinterest!) in no time!! (No joke- we’ve got tons of multi-colored rings, perfect for a tie-dye project!) 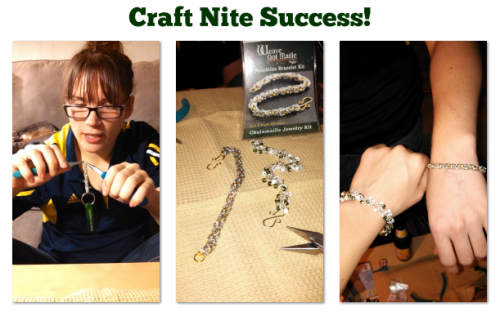