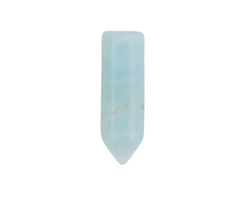 Amazonite beads and focals look expensive, but won’t break your bank account! These semi-opaque, blue-green stones vary from pale seafoam to darker aqua. Amazonite, also known as Amazon stone, is a classic case of mistaken identity. A greenish color stone was worn by Indigenous Peoples in the Amazon area of South America, and European colonists thought the stone was the same as a stone familiar to them (likely Amazonite mined from Russia). The name Amazonite took off even though no Amazonite has been found in the Amazon, and the Indigenous Peoples were likely utilizing jade. When sourced from Colorado, some call Amazonite “Colorado Jade,” presumably to confuse us all further!

“to the point”
by C Amato