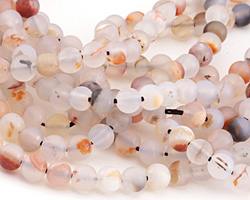 A mostly clear stone with dendritic inclusions, Madagascar Dendritic Agate gemstone beads also have bright orange, ochre, and dark brown and black coloration. They are unique and eye-catching, and remind us of monarch butterflies (the great pollinators!).

Agate is a variety of chalcedony, which is itself a form of quartz. There are a multitude of agate varieties specific to locations all over the world. Madagascar Dendritic Agate does not feature the usual banding characteristic of agate, but instead is translucent and semi-translucent with dendritic inclusions. These dendritic inclusions can look like moss or ferns. They are composed of manganese or iron.