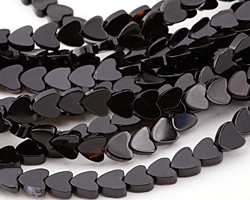 Our black sardonyx beads are a muted, neutral mix of black, brown, and white. The intricate banding pattern of this natural agate creates a lovely, interesting texture. The name “onyx” comes from Greek meaning claw or talon.

Sardonyx is a variety of agate that is composed of straight, parallel bands of black, white, and brown chalcedony. Agate is a variety of chalcedony, which is itself a form of quartz. Agate displays distinct banded patterns, and responds well to various dye treatments. There are a multitude of agate varieties specific to locations all over the world.

Metaphysically, Black Sardonyx relates to courage and cunning. The protective capabilities of sardonyx have been utilized since ancient times, often in the form of amulets and talismans. Sardonyx is an alternative birthstone for August.

This is a modern Valentine's Day inspired necklace. I love using the carnelian tiny heart-shaped...

I love to stack bracelets, so this is my start to creating a cute bracelet bundle. I will be...