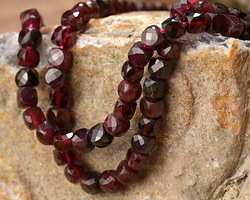 Darkly alluring garnet is never going out of style. Gorgeous on its own or with other stones, garnet is not just classic, but classy. Uniquely shaped, these little stunners are great anchors to minimalist chain earrings, or strung together on bracelets.