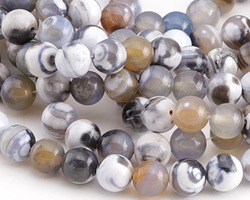 Montana Moss agate comes in soft tones of white, grey, and orange. These beads remind us of a summer thunderstorm over the prairie, swirling, cloudy, and with pops of bright color. There are a multitude of agate varieties specific to locations all over the world. Montana Moss Agate is sourced near Yellowstone National Park, in Montana.

Montana Moss agate is often semi-translucent with dendritic inclusions. These dendritic inclusions look like moss or ferns. They are composed of manganese or iron. Agate is a variety of chalcedony, which is itself a form of quartz. Agate displays distinct banded patterns, and responds well to various dye treatments.