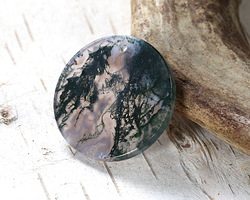 With a wide variety of opacities and swirls of green and neutral hue, moss agate coin pendants are so eye-catching! Get lost in the world of each pendant, evocative of moss, vines, and other forest life. Use for stand-out simple necklaces or in charm necklace styles for added interest. Please see additional photos for variation.

This necklace showcases the modern style of the Moss Agate Coin by wire-wrapping it onto the...

I created this necklace that will match whatever mood I'm in:)This necklace has interchangeable...

“Meditations on mourning”
by Medieval Momma