Follow the Crossword Sale for a new sale every day in January. The sale for January 20 is: Chakra, Lotus and Mindfulness! 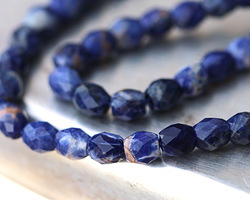 With gorgeous faceted cuts and striking inclusions of orange color, you can't go wrong with these beads. Lovely for earrings, bracelets, and more.