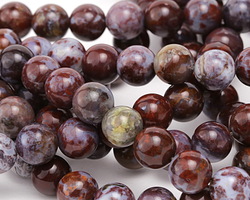 Red Lightning Agate is mostly red with striking flashes of white, clear, green, orange, and mauve. These gemstone beads are opaque with areas of semi-transparency. Holding one of these beads is like holding a summer storm in your hands! The name Agate is associated with the Achates River of Sicily, now known as the Dirillo River. Agate was utilized by ancient Greeks and Romans for decorative carving and arts, and examples from that time are still extant.

Agate is a variety of chalcedony, which is itself a form of quartz. Agate displays distinct banded patterns. There are a multitude of agate varieties specific to locations all over the world.