Follow the Crossword Sale for a new sale every day in January. The sale for January 28 is: 30% Off Deals! 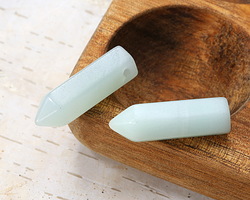 With a classic shape and cut that is also on-trend, these light Amazonite Faceted Points have a lot to offer! Go minimalist and simply add to a petite chain, or layer up with other pieces for an artistic, boho look. Please view additional images for variances.