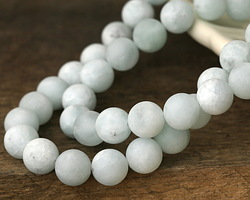 Before these beads were cut, the amazonite rough was heated, causing the "crackling" that you can see inside of each bead. The beads are still structurally sound and will not fall apart. The crackling draws your eye into the stone, adding interest to an already wonderful color.

“My summer garden 2”
by Medieval Momma

“My summer garden”
by Medieval Momma