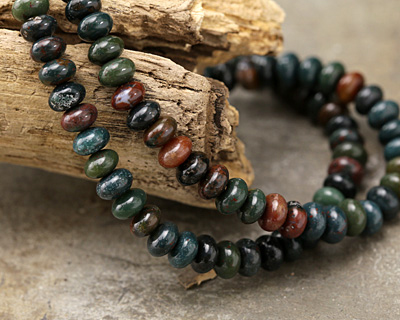 These bloodstone beads are dark forest green with speckles of vermillion. Some of the beads have veins of yellowish tan or of milky, translucent quartz. Additionally, an occasional bloodstone bead is composed entirely of red jasper, injecting a shot of contrasting color into each strand of this gemstone.

In the Middle Ages, bloodstone was often used to carve scenes of the crucifixion and/or martyrdom, thus this gemstone was dubbed the “martyr's stone”.

Also known as Heliotrope, bloodstone is a dark green variety of chalcedony that is spotted with inclusions of deep red jasper. The spots of red jasper resemble spots of blood, hence the name “bloodstone”.

Metaphysically, bloodstone has been used for healing the human circulatory system for thousands of years. This stone is often worn by athletes and performers to enhance endurance. Bloodstone is associated with the root chakra. Bloodstone is the birthstone for March alongside aquamarine.