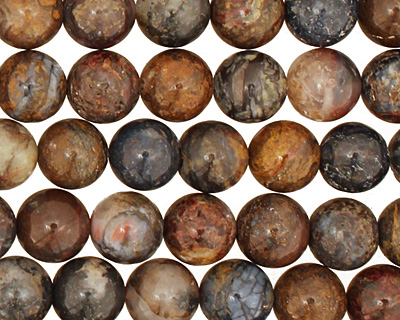 Pietersite is named for Sid Peters, the man who was the first to mine the stone for commercial purposes, in Namibia in 1962. Namibia is still the only significant source of Pietersite. These blue pietersite beads originate from rocks that are nearly all blue - something that isn't very easy to find and makes blue pietersite very exciting! Our Blue Pietersite gemstone beads combine rich iridescent golden browns and hints of red swirled on a background of navy blues.

Pietersite contains fibrous bands of blue, gold and/or red tiger eye fibers that are cemented together by chalcedony. All of the color variations have a striking chatoyancy, the bright shimmer of color that moves along the surface of a gemstone as it is viewed from varying angles.

Pietersite is often associated with the third eye, and is said to assist wearers in finding calm.