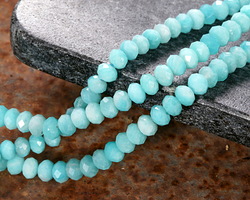 Ever-popular amazonite in a fabulous faceted rondelle cut. Get ready for gorgeous hue and a lot of sparkle! ✨ Add to elegant earrings, minimalist bracelets, and trendy layered necklaces.