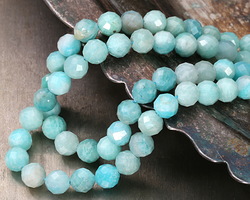 » More Brazil Amazonite or Faceted Round

“blue skies, smiling at me”
by MH