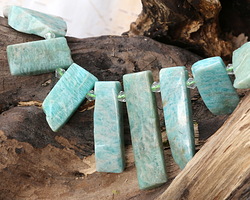 Fan-favorite Amazonite in large graduated drops are a must-have! Conveniently sold as a graduated strand, these slice drops look great on their own or strung in multiples. Please view additional images for variances.