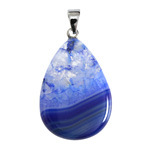 The kids and I love to decorate our garden, especially the tree in the center. It gets the most...

Make any necklace instantly stand out by adding these great fanned tassel focals! I think the...

Treasures of the Sea Necklace

For this design, I used a mix of Czech glass, recycled glass, shells, crystal, and moonstone...