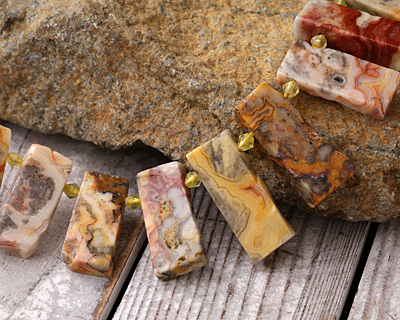 Who wouldn't be crazy for Crazy Lace Agate Beads? Crazy Lace Agate, also known as Mexican Agate or Mexican Lace Agate, is only found in Northern Chihuahua, Mexico about 125 miles south of El Paso, Texas. As one might gather from the name, the look of Crazy Lace Agate beads features unpredictable, lace-like patterns. The colors of Crazy Lace Agate are rich ochers, smokey grays, light creams, and rusty reds. The beads can be attractively dyed various colors and maintain their beautiful patterning. Some varieties of crazy lace agate also contain bands with a beautiful rusty red coloring.

Agates are a variety of chalcedony, which is a form of quartz. Agate displays distinct banded patterns, and responds well to various dye treatments. There are a multitude of agate varieties specific to locations all over the world.

“Leaves are changing”
by Medieval Momma

“In Love With Fall”
by Maggies Mom