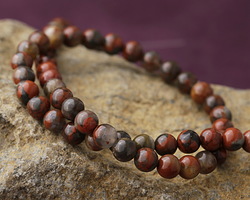 Imagine a meadow of brilliant red poppies stretching as far as the eye can see. The fiery coloration of red poppies certainly makes a statement. Fire Poppy Jasper is named for its striking, bright red appearance similar to red poppy flowers.

Fire Poppy Jasper is a trade name for a dramatic red coloration of orbicular jasper. Orbicular jaspers have orb-like inclusions of quartz or feldspar. Poppy jaspers are mined in California. Jasper is a combination of chalcedony and quartz, and has been used in jewelry and decorative arts for thousands of years. It was often the stone of choice among Ancient Minoan, Egyptian, and Sasanian (Persian) Empires. The name Jasper comes from old French, jaspre, meaning “speckled stone”.