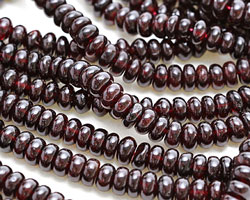 The term garnet actually refers to a group of more than ten different gemstones that have a similar chemical composition. While the red varieties of this gemstone are most familiar, garnet can also be found in various shades of pink, green, yellow, orange, brown, and black. Blue garnets, which are extremely rare, were discovered in the late 1990’s in Madagascar. The most common red varieties of garnet are called Pyrope and Rhodolite. Other common gemstone varieties of garnet are reddish-to-golden brown Hessonite, and yellow, green, and brown Grossularite (Green Garnet).

The name “garnet” is derived from the Latin words “Punica granatum”, meaning “pomegranate”, due to the similarity in color between red garnets and pomegranate seeds. Deposits of Pyrope garnet are found in Burma, China, Madagascar, Sri Lanka, South Africa, Tanzania, and the United States. Rhodolite garnet is found in North Carolina in the United States.