Follow the Crossword Sale for a new sale every day in January. The sale for January 16 is: Stainless Steel Supplies! 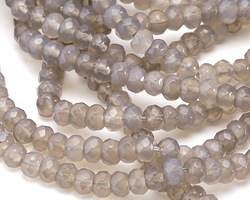 Gray Agate gemstone beads are a calm, peaceful gray color perfect for harmonizing with brighter focal beads. When round, these beads look like little moons! These beads are perfect for popular celestial-inspired jewelry. The name Agate is associated with the Achates River of Sicily, now known as the Dirillo River. Agate was utilized by ancient Greeks and Romans for decorative carving and arts, and examples from that time are still extant.

“dusk angel”
by Creel U

“Peachy”
by Christy H
13 more Fresh Picks with this item >