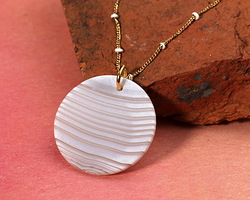 Bright, blanched white meets streaks of alluring translucency in these versatile coin focals. Lightweight enough for earring use, these pendants can also be strung on leather cord or hemp. Please see additional photos for variance in color and pattern.

“Hazy Shade of Winter”
by RobynL