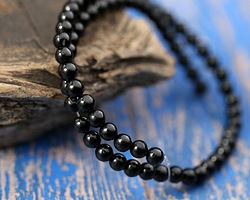 A perennial classic, jet gemstones aren't going out of style any time soon. Jet is so light weight! These stones are ideal for earring and necklace designs.

Popular for over 4,000 years, Jet gemstone beads are both dark and earthy. Ancient Romans believed that Jet had protective qualities when utilized as an amulet or talisman. In the European Renaissance and Victorian eras, Jet became associated with mourning jewelry.

Jet is actually a lignite, a type of lower carbon coal. It is made up of fossilized wood, giving it a distinct earthy striation. Jet forms under high pressure and heat. This stone is quite soft, and works best for pendants. Jet is found all around the globe, but most often sourced from Spain, Britain, Poland, and Turkey.

Jet is believed to be a stone of protection against evil energies.