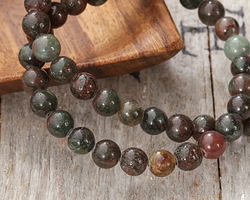 With these subtle and alluring colors, looking at Kashgar Garnet beads reminds us of a winter garden, ready to emerge again stronger for its hibernation and dormant period. Kashgar Garnet is named for the city of Kashgar in Northwestern China, where this garnet variety can be found. Kashgar is on the ancient Silk Road, the 7,000 mile-long route connecting east and west Asia. Close to the border with several other countries, Kashgar remains an important trade hub.

Kashgar garnet is composed of garnet and other material inclusions. The term garnet actually refers to a group of more than ten different gemstones that have a similar chemical composition. While the wine red varieties of this gemstone are most familiar, garnet can also be found in various shades of pink, green, yellow, orange, brown, and black. Kashgar garnet can be semi-translucent to opaque with red, green, white, and black coloration.

Garnet has been a gift to loved ones who travel since ancient times. It is said to benefit the root chakra, grounding its wearer and providing energy.

“For the love of fall”
by Pixie

“Remember me?”
by FaeryGoth Chick