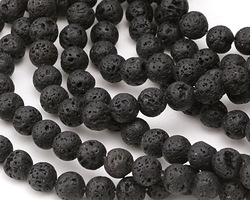 Lava rock beads don't just look good, they can smell good too. Because of their porous nature, lava rock beads make great natural diffusers for essential oils. The beads are deceptively lightweight, making for easy everyday wear! Lava rock is common all over the world and has many uses outside of jewelry making.

Lava rock, also known as volcanic rock or basalt, forms after volcanic eruptions containing high levels of magnesium and iron. Magma reaches extreme heat and then cools, forming this highly porous rock. It has been estimated that volcanic rocks cover about 8% of the Earth's current land surface.

The eastern Asia inspired necklace was designed by Tierracast. The lava rock gives texture and...

The concept of a chakra bracelet pairs really well with the Shambala style bracelet. This is easy...

“Beauty in the Dark”
by Granny Nancy