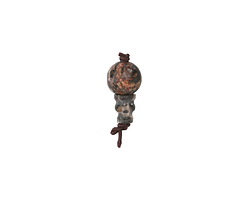 With beautiful natural colors and unpredictable striped patterning, Leopardskin Jasper gemstone beads are like a big cat safari. Leopardskin Jasper is also known as Jaguar stone. It is sourced from Brazil, Mexico, and some areas of Africa.

Jasper is a combination of chalcedony and quartz, and has been used in jewelry and decorative arts for thousands of years. It was often the stone of choice among Ancient Minoan, Egyptian, and Sasanian (Persian) Empires. The name Jasper comes from old French, jaspre, meaning “speckled stone”.

Leopardskin Jasper is said to connect people to the animal kingdom, while also facilitating nurturing behaviors and benefit healing.