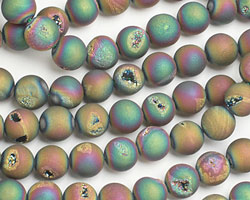 Metallic Agate gemstone beads have been treated for beautiful, multi-color, lustrous effect. The name Agate is associated with the Achates River of Sicily, now known as the Dirillo River. Agate was utilized by ancient Greeks and Romans for decorative carving and arts, and examples from that time are still extant.

Agate is a variety of chalcedony, which is itself a form of quartz.

“At last!”
by Medieval Momma

“Just Gems, But Big Wishlists”
by GemstoneChick aka Lauren