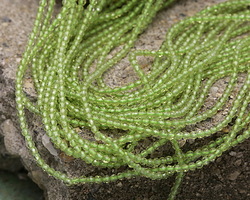 » More Peridot or Faceted Round

“peridot plus”
by MH