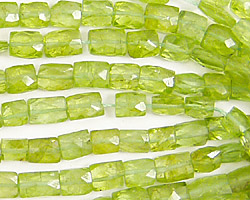 Want to evoke the royal energies of Ancient Egypt? Peridot gemstone beads are the way! Though translated texts often describe Cleopatra and other Egyptian Pharaohs adorning themselves in emeralds, they were likely wearing Peridot gemstones. Peridot mining in Egypt goes back at least 3500 years, and Peridot gemstones feature prominently in jewelry and decorative arts of the ancient world and onwards.

Peridot, also known as chrysolite, is one of few gemstones that occur in only a single colorway - shades of green. Sometimes leafy green and summery, sometimes olive and mossy, Peridot gemstone beads are always gorgeous! The faceted cuts have wonderful sparkle and the smooth cuts have a warm, lustrous glow. This stone is truly a classic and should be the centerpiece of at least one design in your collection. Everyone loves peridot, it's the rule!

Peridot gemstone beads were cut by the ancient Egyptians as early as 3500 years ago and were considered to be a symbol of the sun. In Hawaii, peridot symbolizes the goddess Pele's tears. Tiny grains of peridot are found on some black sand beaches in Hawaii.

Peridot is the gemstone quality version of a mineral group called Olivine. Olivine often forms in basalts and volcanic areas, and its color comes from variations in iron content. Peridot can be found all over the world but is often sourced from the San Carlos Apache Reservation in Arizona.