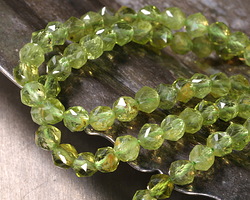 Unique Vesuvianite beads with a gorgeous faceted cut are a surefire hit! Add this peridot look-a-like to elegant earrings, petite bracelets, and more.

“peridot plus”
by MH