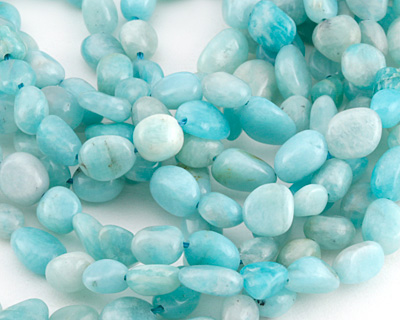 Whether worn to yoga or a tough exam, Peruvian Amazonite gemstone beads might help keep you grounded! Peruvian Amazonite is a soft, light aqua color with occasional brighter turquoise. With inclusions of crackled white quartz and darker streaks, Peruvian Amazonite has a peaceful, organic look. Amazonite, also known as Amazon stone, is a classic case of mistaken identity. A greenish color stone was worn by Indigenous Peoples in the Amazon area of South America, and European colonists believed these adornments were made from a stone already familiar to them (likely Amazonite mined from Russia). The name Amazonite took off even though no Amazonite has been found in the Amazon, and the Indigenous Peoples were likely utilizing jade.

When I first saw these Czech glass melon teardrops, my first thought was that they would be...

“Not Eggs-actly”
by Mary - Sweet Chick

“Farewell to Spring”
by Granny Nancy