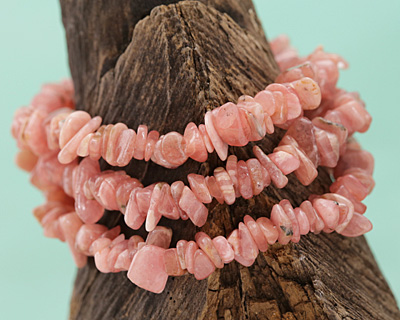 Our Rhodochrosite gemstone beads are a pretty, soft pink color mixed with bands of cream and an occasional spot or stripe of black. This gorgeous soft pink color of rhodochrosite is a rare find in a natural stone! The Incas believed rhodochrosite to be the blood of former rulers that had been turned to stone, therefore it is sometimes called "Rosa del Inca" or "Inca Rose".

The popularity of rhodochrosite beads has skyrocketed in the past couple of years, which has made the natural material hard to find. If you like these beads, you may want to work with them as much as you can before all of the deposits dry up.

Rhodochrosite, from the Greek words “rhodon”, meaning “rose” and “chroma”, meaning “color”, is a rose pink colored manganese carbonate gemstone. It is often confused with Rhodonite, which is a rose-colored manganese silicate. Not surprisingly, the two gemstones are often found in close proximity. The ancient Inca silver mines of Catamarca province in Argentina are famous for stalactites made from Rhodochrosite. These pink “icicles” can be sliced like cucumbers to reveal beautiful rings of Rhodochrosite in different shades of pink. They form when manganese minerals are dissolved by groundwater, combine with a carbonate material, and then drip from the cave ceiling. Rhodochrosite can also be found in Colorado, Quebec, Peru, and South Africa.

For this design, I used Amazonite & Pink Rhodochrosite chips to create a beach-inspired necklace....

Wire wrap a mix of seed beads, Czech glass, and gemstones into these open drop pendants to create...

For this design, I made a long bead chain with Malachite & Pink Rhodochrosite Chips. I love...