This Week: Save on Your Entire Order with code FALLCOLOR through Saturday! Shop Now 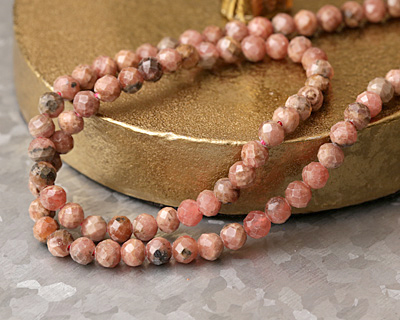 Our Rhodochrosite gemstone beads are a soft, petal pink color mixed with bands of cream and an occasional spot or stripe of black.The popularity of rhodochrosite beads has skyrocketed in the past couple of years, which has made this natural stone hard to find. These beauties won’t be in stock forever! Rhodochrosite has been found in Peru, Argentina, Colorado, Quebec, and South Africa.

Also known as Raspberry Spar and Inca Rose, Rhodochrosite is often found in 13th century Incan silver mines. These mines are famous for stalactites made from Rhodochrosite. These pink “icicles” can be sliced like cucumbers to reveal beautiful rings of Rhodochrosite in different shades of pink. They form when manganese minerals are dissolved by groundwater, combine with a carbonate material, and then drip from the cave ceiling. Rhodochrosite, from the Greek words “rhodon”, meaning rose and “chroma”, meaning color, is a rose-colored manganese carbonate. It is often confused with Rhodonite, which is a rose-colored manganese silicate. The two gemstones are often found in close proximity.

» More Rhodochrosite or Faceted Round