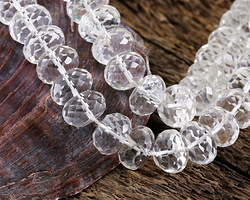 Looking for sparkle that goes with everything? This is it! Rock crystal faceted rondelles are an easy-to-use strand perfect for so many design styles. Add to hand knotted necklace looks, elegant earrings, and sophisticated bracelets. Please see additional images for variance.