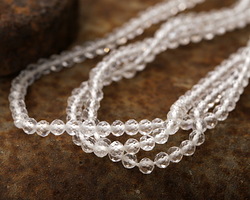 » More Rock Crystal or Faceted Round

When I first saw these new Czech Glass oval beads, I knew I wanted to design something with them....

When I first saw these Czech glass melon teardrops, my first thought was that they would be...

I love the spring vibe the colors of this design give off- the perfect pick-me-up for the cold &...

“Sunny Days”
by Pixie
3 more Fresh Picks with this item >