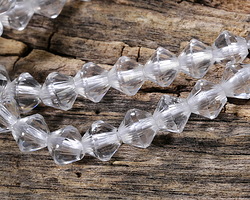 Super sparkly✨ and with gorgeous faceted cut, this strand of rock crystal faceted bicones is sure to please even the most discerning of eyes. Add to chandelier earrings, bead link chain, and more.