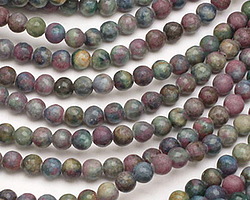 A fascinating blend of color, Ruby Apatite gemstone beads include gorgeous splotches of ruby red color alongside mellow blue and green swirls. Apatite is named from the Greek word “apate”, meaning deceit, since it has a similar appearance to many other gemstones. Apatite can be found in many areas of the world including Myanmar, India, Kenya, Madagascar, Sri Lanka, and South Africa.

Apatite is actually a group of the three phosphate minerals fluorapatite, chlorapatite, and hydroxylapatite. It presents as hexagonal crystals.

Apatite is said to be a great stone for encouraging inspiration and is famous for deepening meditation. It is associated with the third eye chakra and brings its wearer motivation.