Follow the Crossword Sale for a new sale every day in January. The sale for January 26 is: Earring Findings! 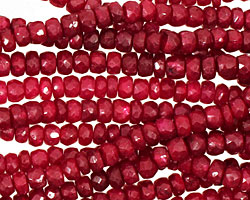 These ruby beads have been color enhanced. They are natural ruby material, but the ruby color has been enhanced with dye. They sparkle like you expect ruby to sparkle!