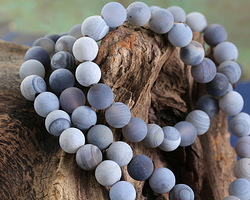 With a neutral grey-toned color palette with eye-catching striation and pattern, these storm line agate rounds are easy to include in many design styles. Add to modern beaded bracelets, layered necklace looks, and more.

“Stormy Skies”
by Talismans and Trifles