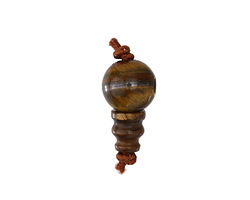 Tiger Iron is mostly composed of tiger eye, jasper, and hematite but can have other inclusions. It is found in sedimentary rocks. Each banded layer of material is relatively thin, varying in thickness from a millimeter up to several centimeters.

Metaphysically, Tiger Iron is said to possess the qualities of its component parts - red jasper, hematite, and tiger eye. This is said to imbue it with grounding, protective, and energizing qualities.

Poppy Jasper Round Guru Bead 10mm BACK IN STOCK!

New Jade Round Guru Bead 10mm BACK IN STOCK!